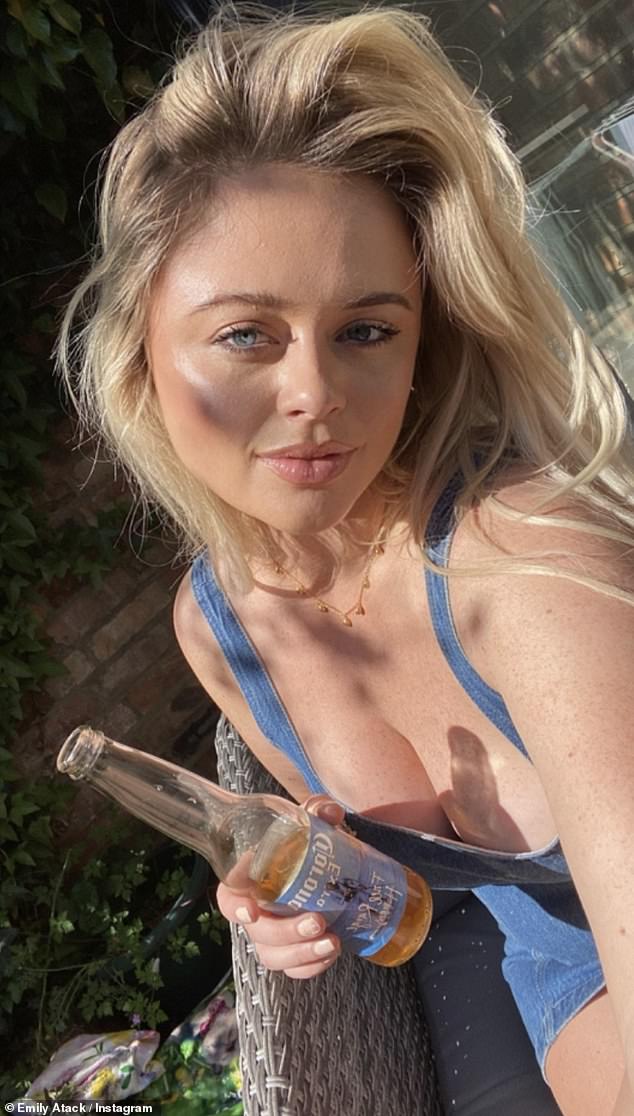 Emily Atack had a fresh look on Saturday when she relaxed with a beer in the sunshine.

She put a big-breasted display on top of low-cut blue denim, giving the camera a sultry look when she swept her hair sideways and posed.

Downtime: Emily Atack, 32, wore a busty display with a fresh face and a blue denim dress while relaxing with a beer in the sunshine on Saturday.

She wore a makeup lash to accentuate her pretty facial features and made the most of the golden light when the sun began to set.

The former I’m a celebrity … get me out of here! The campmate was decorated with delicate gold chains and had a partially drunken lager in his hand.

Earlier this week, a former Inbitweeners star used Instagram to share his photos in a completely attractive way, in preparation for the launch of the latest series of celebrity juices.

Shining Star: At the beginning of the week, a former Inbitweeners star took him to Instagram to share his photos completely attractively in preparation for the launch of the latest series of celebrity juices.

She captioned her snap:’Favorite charm of the series! Juice returned tonight at 10pm @celebjuiceofficial.

Emily laughed a lot when she carried Jamie Lang and acted as a human backpack to challenge celebrity juice this week.

She wore an unbuttoned white shirt and school tie, and then packed a lot of school-themed stuff into her clothes.

Play the game: Emily laughed when she mounted Jamie Lang and acted as a human backpack to challenge Celebrity Juice this week.

The television personality turned her back to former Made in Chelsea star Jamie, 33, and lay her arms on her shoulders and on her back.

Later, Jamie was tasked with taking an obstacle course while carrying Emily, and the game was at a loss.

As Emily’s towering pink heels shook on Jamie’s back, the pair was dangerously confused.

Ready to roll: The actress wore a white shirt and school tie, then stuffed school-themed objects into her clothes.

On the go: She turned her back on former Made in Chelsea star Jamie, 33, and climbed on her back with her arms outstretched over her shoulders.

“Fill her from the desk with school stuff and go along the truck on this bar here.

“Hop the scotch and then put it under the limbo bar.”

Both Jamie and Emily, and the studio audience, were hysterical while they were playing the game.

Challenge accepted: Jamie was tasked with taking an obstacle course while carrying Emily.

Instructions: Host Keith Lemon told Jamie: “All you have to do is use Emily as a human backpack.”