Love Island 2022: Andrew shares kiss with Coco… as it emerges he has ‘pre-show link’ to Cheyanne 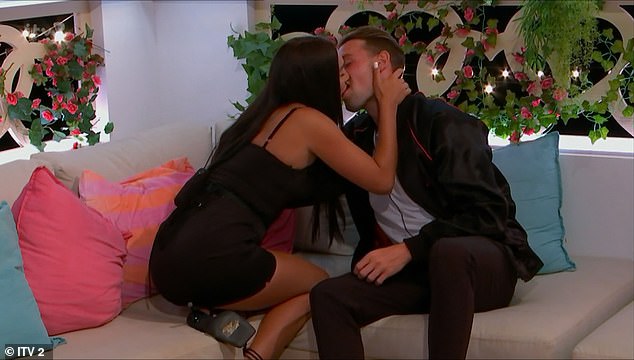 Love Island viewers were stunned as they watched Andrew lock lips with newcomer Coco in Casa Amor on Monday night while his former partner Tasha remained in the main villa.

The smooch came as it emerged real estate agent Andrew, 27, has a ‘pre-show link’ to Coco’s fellow new Islander Cheyanne, 23, after he liked around seven of her Instagram snaps taken in April before the series launched, and with their location tagged in Dubai where Andrew works – while Davide also liked a photo of Cheyanne on a night out in Manchester in March.

He was seen telling Coco ‘you’re a bit of me’ – as his partner Tasha, 23, was out of sight, and seemingly out of mind too, in the main villa.

Andrew ventured to the beach hut and explained that rather than think about Tasha, he was going to be: ‘Thinking about myself for once’.

History: It emerged Andrew, 27, has a ‘pre-show link’ to Cheyanne, 23, after he liked around seven of her Instagram snaps taken in April, while Davide also liked one taken in March

The pair stole a moment away from the rest of the group on the terrace, with Andrew telling the graphic designer: ‘I did want to talk to you, as I know we had a chat this morning. You know you are my type and I definitely wanna get to know you more.’

Seemingly pleased with the news, the bombshell admitted that her mum would get on well with Andrew and would want her to go for him, before questioning: ‘What about Tasha?’

Success: Seemingly pleased with the news that Andrew likes her, bombshell Coco admitted that her mum would get on well with Andrew and would want her to go for him

Later in the chat, Andrew will mentioned an earlier kiss they shared during a dare from the boys, asking Coco if she’d like to do it again – as she gushed that he was a good kisser.

Throwing the question back at Andrew, she asked: ‘Do you wanna do it again?’, as he leant in to kiss her.

While Andrew may have set his sights on Coco during Monday’s episode, it has emerged he also has a link to another Casa Amor girl – he like a number of Cheyanne’s Instagram posts that were posted before the show launch.

Locking lips: The pair kissed earlier in the evening as the other boys dared Coco to give Andrew a smooch

Set for heartache? It comes as his partner Tasha Ghouri is out of sight, and seemingly out of mind too as she spends time in Casa Amor with six new boys

New couple? It would seem Coco didn’t waste any time as she and Andrew then shared a bed in Casa Amor

Cheyanne is seen sunning herself in Dubai in the snaps, with Andrew working in the Emirate as an estate agent.

While Andrew liked around seven of Cheyanne’s pictures, Davide also liked one from March which showed her enjoying a night out in Manchester, where the Italian stallion lives.

MailOnline has contacted a spokesperson for Love Island and representatives for Andrew, Davide and Cheyanne for comment.

The pair shared a flirty conversation which led to Davide smooching her as she teased that he’s not ‘confident enough’ to make the move, prompting him to plant a kiss on her.

The heated smooch was soon finished when Davide went to chat to Dami and Andrew about the quick snog.

Catching the eye: It has emerged he also has a link to another Casa Amor girl – he like a number of Cheyanne’s Instagram posts that were posted in April before the show launch

Fun in the sun: Cheyanne is seen sunning herself in Dubai in the snaps, with Andrew working in the Emirate as an estate agent

His type: Andrew has liked around seven of Cheyanne’s Instagram posts and, while he follows her, she does not follow him in return

Davide conspired: ‘I think Coco is playing a bit of a game…I think she just wants to couple up.’

The shenanigans left viewers shocked, with one person writing on Twitter: ‘Okay, I don’t like Tasha and her mugging Andrew off! But I just don’t get the obsession with this Coco girl? She just kissed 2 lads and made a sly ‘bye’ remark at Tasha’s name #LoveIsland.’

Another viewer wrote: ‘Pure foolishness from #Andrew tonight after listening to his friends. He’ll be crying and begging for #tasha back in a couple of days when he realises #coco is using him to get in the villa #LoveIsland and snogged his mate #davide too.’

Out on the town: Davide also liked one from March which showed her enjoying a night out in Manchester, where the Italian stallion lives

While someone else posted: ‘how is andrew going to kiss coco immediately after hearing she kissed davide MEANWHILE he’s told tasha he wants to date her????? i’m lost #loveisland.’

‘Coco lipsed Davide and Andrew in the space of an hour lmao #loveisland,’ another audience member laughed.

Another show fan posted: ‘Andrew doesn’t want to be taken for a mug for being with Tasha, yet he’s getting with Coco after the boys agreed she’s just tryna couple up to get in the main villa?? She literally kissed Davide 5 mins before Andrew #LoveIsland.’

Unimpressed: Love Island viewers took to Twitter after Monday’s show to express their opinions on Andrew and Coco’s kiss after she also kissed Davide

Someone else shared: ‘andrew… i just. i’m confused. you heard dami and davide say coco was playing a game and just wanted to couple up. are you looking for something in that?? like what are we doing?? #LoveIsland.’

Another person asked: ‘But really, how could Andrew go and kiss Coco as soon as Davide told him they just kissed. Like, are you not embarazzzzzed #TALKSWITHASH.’

While another person tweeted: ‘Andrew looks more like a mug doin all that with coco, like id give him some grace if he couldn’t pick up on the game playing but kissing right after she kissed davide? please. #LoveIsland #TALKSWITHASH.’

What are you looking forward to in the Villa? I think that I’m just genuinely good vibes – very goofy, very silly. Everyone will be fun around me. I don’t really take things too seriously. I feel like I might end up bringing some drama because I do want to go full force with Dami…

Who have you got your eye on in the Villa? Jacques – humours the biggest thing for me in a partner. I never go for looks and I don’t have a type at all. It’s definitely who makes me laugh

How would your friends/ family describe you? They’d probably describe me as a predator. I’m super flirty! I give off big energy and boys gravitate towards me and I’m always flirty.

Why have you signed up for Love Island? My mum got married at my age and my cousin is already engaged so she’s always told me how I should hurry up and find someone. I’m terrible at picking men so I thought Love Island would do a better job than me!

Who have you got your eye on in the Villa? I’m actually Italian, too. So I really like Davide, he reminds me of a lot of my family and he’s gorgeous. I’ve never actually seen someone so good looking in my whole life! I

Who is their type on paper? ‘In Swansea there is just no-one I can find.

‘I haven’t got to swipe. So, hopefully they can just come to me now!

‘I came out of a relationship and I was just so done with guys. Then I was like, ‘Ok, I’m bored now’

Who is their type on paper? ‘It’s quite hard to date without being influenced by social media and stuff like that.

‘Love Island is a great place to get to know someone one-on-one.

‘I don’t think I have ever been out with two guys who are quite the same.’

Who is their type on paper? ‘My dating life has been a shambles.

‘This is an opportunity for me to find ‘the one’ and have a great summer at the same time.

‘I’m definitely ready for a relationship. I’m 23 now so I’m ready to get to know someone and travel with them.’

Who is their type on paper? ‘I am open to finding love, I’m wanting to have a really fun summer.

‘I would say I’m fun, flirty and fiery. I think I’m good at giving advice, I’m a good person to talk to, I’m very honest.

‘If I want the same guy, I’d do it but in a nice respectful way.

Who is their type on paper? ‘When I’m with someone I’m very loyal.

‘I’m a good boyfriend as when I’m with someone I’m all for them.

‘I’m actually single for once, so I thought why not?

This is the best time to give it a go.’

Who is their type on paper? ‘I’m quite picky and I’m not just looking for looks, I’m looking for brains!

‘I’m looking for someone with intelligence, someone who can have good chats. Nothing like cockiness!’

Who is their type on paper? ‘I am a slow burner for sure, yeah. I don’t fall easily.

Who is their type on paper? ‘I will be talking to different girls, it might not go well with some.

‘When I’m actually in a relationship, I think it’s a star sign thing.

‘I’m an Aries but I’m very passionate – I always used to put that person first. I’m really good at being in a team’.

Who is their type on paper? ‘A lot of English girls actually love me.

‘Find my person so I can actually build something in the future, grow with them, be a family. ‘

Who is their type on paper? ‘I prefer to meet girls out and about. I think when you go looking for it, it’s not as easy though, it’s like you’re too desperate for it.

‘If I think you’re the one or I like you, I’ll take you out on a date but other than that, if we talk and I don’t like where it’s going – then I won’t be throwing out dates.’

Who is their type on paper? ‘I think it needs to be the right person, at the right time.

‘I was saying to my mum the other day that I want a girl. And I’m now ready to settle down.’

Why Love Island? I’ve been single for almost a year and a half and for the whole of the last year my goal has been to have as many different experiences as possible.

Who is their type on paper? ‘I am the type of girlfriend that I want to do so much with you – deep conversations, silly activities.

‘If you say let’s go canoeing all day even though I am quite a glam girl, I am down for it.’

Why do you think you’re a catch? ‘I am probably slightly more mature than some other people in the Villa. I’ve got some things figured out. I think I’m ready to settle down, basically.’