Which ‘Real Housewives’ star are you based on your zodiac sign? 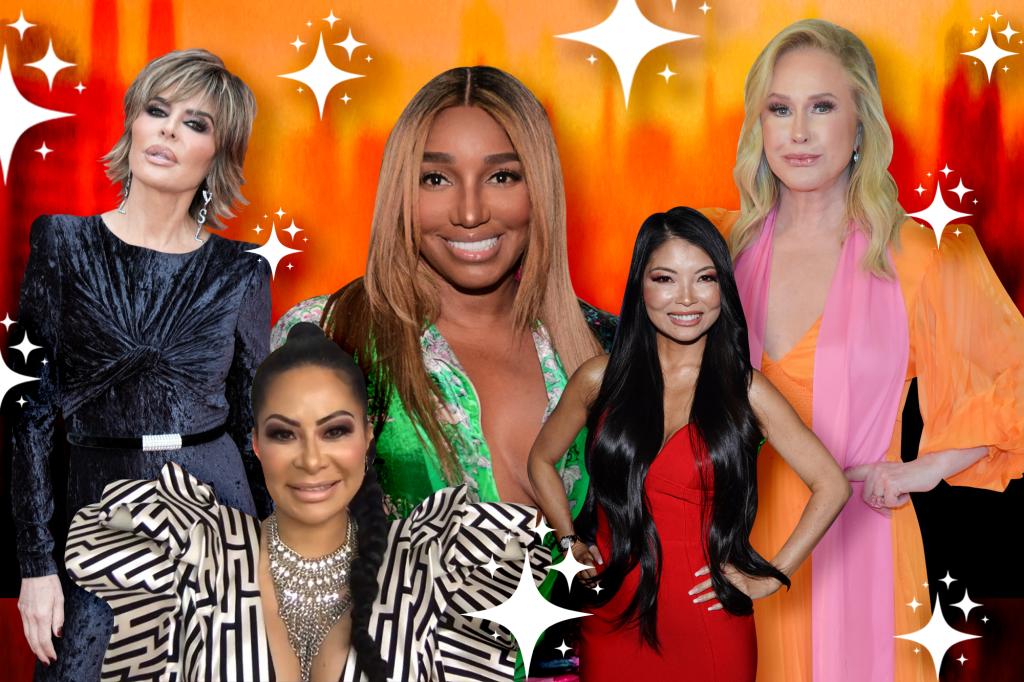 The “Real Housewives” universe continues to expand with “The Real Housewives Ultimate Girls Trip Ex-Wives Club” premiering June 23rd on Peacock. For eight glorious days, some of the most controversial Bravo broads bunked up and let loose in Dorinda Medley’s, “not old but historic“ estate in the Berkshires.

What differentiates this iteration of the “Girl’s Trip” from the first season of the spin off is that all of the cast members have departed their original franchises.

With heavy hitters like Brandi Glanville and Dorinda Medley filling out the roster, the white wine and the bad blood are sure to flow. In honor of this hallowed occasion we’re taking a look at the zodiac signs of the brightest and boldest Bravo wives before you press play and watch all the messiness unfold.

The first sign in the zodiac, Aries is impatient, impulsive, and infectiously fun. These folks struggle with subtlety, softness and sitting still but refuse to play the victim no matter how much trouble or trauma is dealt to them. We see this energy expressed in Gunvalson who celebrates with aplomb whether throwing herself a male stripper laden breakup party or a “sex-tay” sixtieth soiree.

Fun is indeed the fuel for this fire sign and as Gunvalson iconically declared, “I go big or go home, and I’m not going home.” An Aries poem if ever there was one. Another Aries firebrand is found in Melissa Gorga, arguably the only woman brave enough to go toe to toe and filler to filler with bull(y) sister in law Teresa Giudice.

Taurus is ruled by Venus, planet of love, aesthetics, attraction and assets. As such, bulls prioritize financial security, plush home furnishings, sex, good lighting and having sex in places with good lighting. Enter bull queen Kandi Burruss who runs Bedroom Kandi, a sex toy empire, whose mission is to “destigmatize intimacy and self-love, promote sexual wellness and education, and empower entrepreneurs to find success and happiness in the business of pleasure.” Orgasms and earning potential? Big time Taurus vibes.

Taureans are notoriously demanding when it comes to their surroundings, a fact proven by bull royalty Luann de Lesseps who refused to sleep in a fish themed room in Dorinda Medley’s mansion. Ugly things, and questionable decor can easily translate to this earth sign acting ugly and questionable in return.

Gemini is ruled by Mercury, planet of communication and exchange, social media, conspiracy theories, poetry and the graceless art of inserting your foot firmly in your mouth. Those born under the stars of the twin are expressive, often speaking and posting before thinking or editing. Such is the case for Kanye West and such is the case for controversial RHOSLC cast member Jennie Nguyen whose polarizing, racist, anti Black Lives Matter themed posts led to mass outrage and calls for her dismissal for the show. On the brighter side of this dual sign lives adaptability, a quality personified by Gemini Taylor Armstrong. Read more about what makes Armstrong a typical twin here.

The Real Housewives of Beverly Hills are positively awash in Cancer vibes with Teddi Mellencamp, Dorit Kemsley and Erika Jayne falling under the sign of the crab. But, it is Lisa Rinna that wins for wateriest of the women with multiple planets including her sun, Mercury and Venus all in Cancer. Cancer is ruled by the moon and associated with the archetype of the mother and Rinna proves herself a fierce one, ever quick to defend her children or take issue with their questionable suitors. Cancers are drawn to drama like crustaceans to the shoreline and aren’t above grudge holding, wig wearing or petty scorekeeping, and Rinna is no exception. Another crab babe that shows that caring is the modality and also the downfall of this cardinal water sign is RHOM alum and former bestie/lady in waiting to Kim Kardashian, Larsa Pippen.

Leos are ruled by the sun and never shy away from the spotlight. The most astute among them understand that to a certain extent, all press is good press and it only matters if someone is watching. No one understands the power of publicity better than lion queen Danielle Staub. In the most quintessentially Leo move of November 2019 Staub declared that only icons, herself included have sex tapes. Whether she sets tongues wagging over her sex tape, criminal record, parking abilities or being stabbed by a fork, Staub makes sure she stays on the lips and in the minds of the masses.

Virgo rules the sixth house of service and daily habits and at their best, Virgos are driven by a desire to help. For Virgo Tamra Judge that includes helping folks get and stay in shape through her gym CUT Fitness, saving Vicki Galvenson from choking, and perhaps providing a certain sexual healing to Denise Richards. At their worst, Virgos can be critical and proselytizing, cue Judge’s alleged fat shaming/wellness amping of Shanon Beador. Ruled by the planet of ideas and exchange, Virgos are famously mercurial and perennialy suspicious, tendencies we see in Judge’s claims that Capricorn frenemy Heather Dubrow is cock blocking her return to the RHOC.

Libra is the sign symbolized by the scales and balances and ruled by Venus, planet of aesthetics. Thus, it absolutely tracks that RHOSLC and unequivocal Libra Jen Shah would plead her innocence through fashion, producing apparel ahead of her fraud trial with such slogans as “Not Guilty” and “Shah-mazing.” Libra is the sign of partnership and these natives like to have a crew around them at all times to deal compliments and help them through the painful process of deciding what salad dressing to choose or lipgloss to apply. This may help explain why Jen has no discernible career but employs eight assistants.

Ruled by Pluto, planet of death and regeneration, no one is better than rising from wreckage like a Scorpio and no one proves the point quite like scorpion Brandi Glanville who managed to turn heartbreak at the hands of her philandering ex-husband Eddie Cibrian into a turn at reality tv stardom and a roll in the hay with Gerard Butler. Scorpios are well versed in vengeance and it’s fitting that Glanville has threatened death or serious harm against her enemies including but not limited to LeAnn Rimes. Another pair of scorpions who know a thing or two about how to make a buck and start a fight are Bethanny Frankel and Ramona Singer.

Sagittarius rules the ninth house of philosophy and the pursuit of higher knowledge and lord knows archers live to speak their often unsolicited, sometimes hilarious and rarely tactful truths. We see this play out in Sagittarians like Dorinda “Jovani” Medley, Sonja “It’s not a walk of shame it’s a lap of victory” Morgan and perhaps most notably in Sag queen Nene “not a husband stealer” Leakes. Whether warring with who pull no punches and would rather spit spite than bite her tongue. As Leakes preaches, “I don’t bully anybody. I stand up for what I believe in and I’m very honest and I always tell the truth. I’m not a liar, I’m not manipulative and I don’t stab you in your back because I will stab you in your chest.” We appreciate your candor and your front facing impalements Nene, bless up.

Capricorn wears the pants and rules the tenth house of public image. There is major authoritarian, absolute power energy about seagoats. If they’re not in control or calling the shots, they aren’t interested in playing at all. We see this expressed in alpha dog Kyle Richards who allegedly gets the final say in who stays on housewives roster. The only thing that divided Capricorns from their destiny as militant dictators is a love of luxurious fashion and Richards is the proprietress of a string of high end boutiques.

There’s a certain elitism among Aquarians. These air signs with their dual planetary rulers and their big picture thinking can’t help but feel like they know better, are better, and deserve better, especially when it comes to relationships. Enter former Miss USA, self-proclaimed icon and liberator of mediocre marriages, ladies and gentlemen Kenya Moore. The poise and confidence of water bearers like Moore is downright aspirational. Somewhat emotionally detached, Aquarians only really lose their s**t when reminded that everyone comes in second place, sometimes. Aquarians like Kenya make for formidable foes. An unyielding fixed sign, they often clash with people who share the same sign, like fellow Aquarius Marlo Hampton, or the same modality like fixed signs Drew Sidora and Ramona Singer.

Pisces is ruled by Neptune, planet of dreams, delusions, whimsy, and cryptic messaging and the sign is represented in all its mutable, watery glory by Kathy Hilton. Pisces are prone to acts of escape, and Hilton seems to seek solace in sweatpants, early onset holiday decorating, late night snacking, martini pranking and sleep. Fish folks have active imaginations that make them both creative and paranoid and given to fear of the dark. We see this in Hilton who contacted her husband for rescue when she was left home alone during a RHOBH cast trip to Aspen. Was she afraid of bumps in the night or the mere thought of her sister Kyle? Either way Kath, we get it.

Astrology 101: Your guide to the stars

Astrologer Reda Wigle researches and irreverently reports back on planetary configurations and their effect on each zodiac sign. Her horoscopes integrate history, poetry, pop culture and personal experience. She is also an accomplished writer who has profiled a variety of artists and performers, as well as extensively chronicled her experiences while traveling. Among the many intriguing topics she has tackled are cemetery etiquette, her love for dive bars, Cuban Airbnbs, a “girls guide” to strip clubs and the “weirdest” foods available abroad.